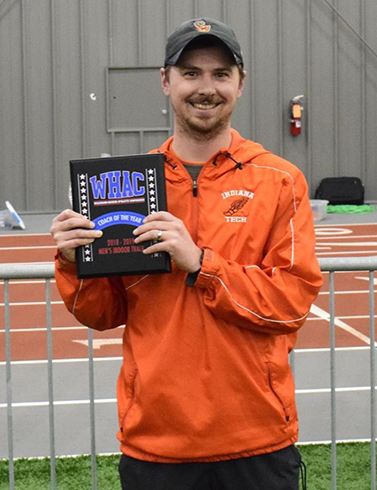 The new Indiana Tech indoor track and field facility at the university’s Warrior Park athletic complex will be named in honor of Indiana Tech men’s and women’s track and field head coach Doug Edgar. Made possible through a $4 million donation from an anonymous local donor and announced in May 2021, the Doug Edgar Indoor Track will include a six-lane competition track installed by Beynon Sports, an industry leading manufacturer of track and field/athletic surfaces. The interior of the track will have a turf surface, which will allow other athletic teams to utilize the space.

The facility’s name was suggested by the donor, in honor of Coach Edgar’s leadership of the program and his work on behalf of Indiana Tech student-athletes since joining the university. Edgar started with the Warriors as an assistant coach in 2008, and was promoted to head coach in 2010. In the years since, Indiana Tech has won 14 NAIA national championships in indoor and outdoor track and field, across men’s and women’s competitions. He has been named the NAIA coach of the year 11 times, and under his leadership the track and field programs earned three consecutive NAIA Program of the Year honors from the U.S. Track and Field and Cross Country Coaches Association, from 2015-16 to 2017-18.

Construction of the Doug Edgar Indoor Track will begin in October 2021, with a public groundbreaking event scheduled for Thursday, October 28 at 1:00pm at Warrior Park. The facility is anticipated to be completed in time for the indoor track and field season starting in the fall of 2022.

Indiana Tech President Karl W. Einolf, Ph.D., said, “The $4 million gift to build our new indoor track and field facility is the largest single donation in the history of our university. This act of remarkable generosity comes from a donor who has long supported our students. It is only fitting that this new facility will be named in honor of someone who has done equally remarkable things on behalf of our students and our entire Warrior community. Coach Doug Edgar has built one of the premiere athletic programs in the country while helping countless student-athletes achieve their dreams of earning a college degree. I am grateful for his work, and for the generosity of our selfless donor.”

Coach Edgar commented, “To say I am humbled by this honor is an understatement. I’ve appreciated every moment of being able to coach such tremendous young men and women throughout my time at Indiana Tech, and to work side-by-side with great assistant coaches. We have strong support from everyone at the university, from athletic and school administrators to faculty, staff, students and alums. We’ve achieved success together, as a team. This donation is only going to make our program stronger, and give our student-athletes an even better college experience. Thank you once again to our generous donor for the truly amazing support!”