From Soybeans to the Stars 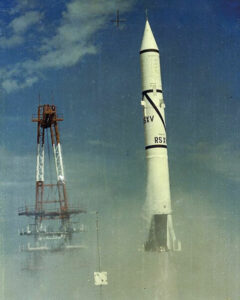 Russel Rhodes, who grew up on an Indiana farm never having seen an airplane in flight, was embroiled in a bit of a disagreement with some of the world’s greatest minds when it came to aeronautics. His Indiana Tech education in tow, Rhodes was at Cape Canaveral, Florida, as part of the NASA group attempting to launch a Saturn I rocket, when a liquid oxygen fill-and-drain valve did not register as being closed, leading to an initial decision to abandon the early 1960s launch.

“They called a scrub and I said, ‘I don’t know why you’re scrubbing.’ It wasn’t just a few seconds and von Braun was standing in front of me wanting to hear my proposals,” Rhodes, 85, recalled. “So I said, ‘Well, here’s what I propose to do.’ All my associates were standing around and they were shaking in their boots. They said, ‘You’re going to blow this.’ I told them I knew what I was doing.”

Rhodes’ workaround included setting up a manual component panel to match the automatic configurations of the time, saving the launch. It was just one great moment from a career with NASA that spanned 52 years—though he’s still active in some roles, such as with the Space Propulsion Synergy Team that promotes better communication between technology users and developers in the industry.

Not bad for a guy from Tippecanoe High School, who had grown up working in the fields and milking cows after school, then graduated from Indiana Tech with a B.S. in Aeronautical Engineering in 1958.

“The most amazing thing, and the gratifying aspect of Indiana Tech, was that (before) I went there I didn’t have any money. My father had allowed me to plant 20 acres of soybeans and … he told me whatever you make off that you can have to start your schooling,” Rhodes said. “I made $600 to start. It doesn’t sound like much today, but it was pretty good for a start. However, I had to find work right away (when I started school) and I found that was pretty difficult, even in an industrial town like Fort Wayne. Then I heard an announcement over the PA one day that they wanted students for part-time work.”

Rhodes worked in the research and development lab and, through various opportunities given to him as an Indiana Tech student, began getting equal parts classroom and real-world experience in Fort Wayne. Among his duties were testing magnet wire equipment for local companies, maintaining the Allen County Courthouse clock and repairing equipment for the electrical engineering department.

“The memorable aspect was all the experience I got from all the jobs they gave me there, and the process was highly valuable,” Rhodes said. “I learned more from that than I would have just from classwork. So, it couldn’t have been more ideal.”

All the while, he knew he wanted to get into aeronautics.

“I don’t know why. Growing up on a farm, I’d never seen an airplane,” he said. “But I had it fixated in my mind that I wanted to work with airplanes, I wanted to be an airplane designer, so that’s why I chose aeronautical engineering. People would say, ‘Why did you pick that one? It’s a tough one.’ I said, ‘I don’t worry about whether it’s tough or not, that’s the one I want.’”

After graduating from Indiana Tech, Rhodes found it difficult to get a job because employers knew he was likely to be drafted soon. He indeed went into the Army, which assigned him to the Ballistic Missile Agency in Huntsville, Alabama, and connected him with people who would eventually want him for NASA—where he would work even after his military commitment was fulfilled. 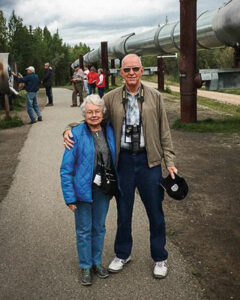 Along the way he met his wife Janice—Russel was working at Fairchild Stratus in Hagerstown, Maryland, on a classified Army program, and Janice was a schoolteacher—and they went on to have six kids and 15 grandchildren. They now live in Indian Harbour Beach, Florida.

Russel Rhodes’ career of design, development and operation of transportation systems took him to well-known projects such as the Space Shuttle and Skylab programs.

On the shuttle, for example, Rhodes said: “One of the things we had to manage was 58 propellant fluids on that vehicle and 28 of them would have to be serviced every launch. And that doesn’t mean 28 locations, that means 28 different types and multiple locations for several of them. … And in the meantime you had to come up with designs to safely load that stuff. I had to be pretty forceful and impose design restrictions on the vehicle such that we could safely handle it.”

Indiana Tech has had many connections to the space program—when the Saturn V was launched, Rhodes said, there were three people from his aeronautical class participating—and he’s proud of the accomplishments the U.S. has made in reaching for the stars.

“I listened to all those people who had told me how crazy I was and that we’d never go to the moon and that it was just pie-in-the-sky,” Rhodes said. “The day we launched that mission (to the moon in 1969), Apollo 11, I took the family and we flew to Chicago and I said, ‘I want to be in my home area where I grew up and see the reaction of these guys who’d told me how stupid I was.’”